It. Is. HERE! Oh Your Gods! My Omni Move finally arrived. It only took 4 years and $200+ in shipping but it's here! Right about now you're looking at me like I'm some crazy person. Good news, Everybody! You're right, I am a crazy woman. But, I'm a crazy woman with an Omni Move. What's that? You've got no idea what I'm talking about? The Omni Move is like a treadmill, but it's round and it lets you control video games with your movements. It's made to work hand in hand with your new shiny VR headsets. It is amazing. Or, I'm sure it will be when I can get my computer to work with my Oculus headset.

Let us back track 4 years down the Gingir timeline. It's 2013 and I am just starting to get my girlie hard on for Virtual Reality things when a wild Kickstarter program pops up on which ever geeky nerdy website I was browsing at the time. Let's be honest, it was probably Reddit. $479 dollars, they said, for the Omni, Omni Rack, Shoes, Belt, Tracking hardware and software and at the time my estimated delivery date was January 2014. I signed on the dotted lines and practically threw my money at them. Bring on the Virtual Reality!

And... cue the crickets. Time lines got pushed back, problems with finding a manufacturer that wasn't using child labor, someone probably got fired, some folks got hired, the world ended and began again and then finally the day came in 2017, 4.5 years later, it was time to have my Omni delivered! Ahh, girlie gasms again! Now I had to pay shipping of course which came out to like $260 and some change I think.

Oh sweet, bejeebus, my Omni was coming home! Amazing! Here is where I ran into problems. I dusted off my Oculus and began getting everything arranged and ready for my Omni to arrive. I plug in my Oculus which I'd used successfully for a year after its release. Update the software and, fock me running with a q-tip, there was an error message. It seems one of the past updates made the Oculus no longer compatible with my graphic cards.
Son of Biscuit!

Alright, no problems, I know how to work a credit card, I begin my search for a replacement graphic card. We have a problem, Houston. Have you heard of this little crazy thing going on right now called Crypto Mining? Yeah, neither had I really until I found that every compatible graphics card was either sold out or marked up so outrageously I'd have to sell my left kidney to be able to afford one.
It seems some of these folks smarter and nerdier than I had found a way to literally make money doing nothing. Now that's funny because I make money making things from nothing. Laugh, dammit. These folks are using the processing power of graphic cards, AMD specifically, to act as bank accountants of sorts for the virtual currency market. I don't totally understand what they're doing, but what ever it is, they're literally building rigs that need refrigerated rooms to be able stay running. Think of a normal PC tower. Not so big. These things are like that but built on a rack that holds a half dozen or more graphic cards. They're monstrous. And because of the lucrativity of the market they're in, they're nabbing up graphic cards like they're going out of style. It's like the gold rush days but in computer land.

Sadly, that is where I'm at for the moment. I have my Omni, I have my Oculus, I do NOT have a graphics card that will allow me to use the two together. Unless his Holy Noodliness deigns to drop a graphics card in my lap or the Crypto Mining bastardos find a way to do their thing without jacking up the prices on graphic cards then I'm going to be the sad heartbroken girl over here with her new toys that she can't use. The tears are real, man. The tears are real!

I've got a peek at the Omni for you though. I did take a picture of the box. It was big enough it needed its own pallet that was shipped here in the back of a big rig truck. I could hide a dead body in that box. Maybe two if you folded them right.

The Omni comes in several pieces. It also includes a handy little floor mat that acts like an Ikea instruction manual for putting together your Omni. I laid that flat out on the carpet in one of my spare rooms. I then carefully followed the instructions for putting this monstrous thing together.

Yall, this thing is heavy! I'm betting it weighs a good 200lbs to itself. the two arms on this thing weigh about 60 lbs or so each. it's not some tiny frail thing. This beast looks like it's going to hold up to just about anything I can throw at it. I've been playing in it, wearing my shoes, walking and running just to get a feel for it. It feels weird to be strapped into this thing. I cannot even properly describe it. I hope that once I get my Oculus going it will feel more natural, I won't see the barrier holding me in place and I can get more absorbed into my game.

Either way, I'm still excited about this thing. I have already decided to move my computer to another room so I have more space and can work on getting my virtual reality corner set up.

Pictures below for your viewing pleasure:

The box of doom and wonder! 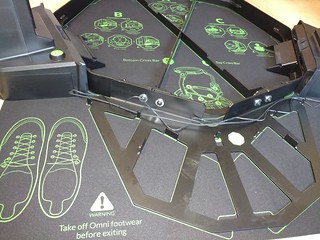 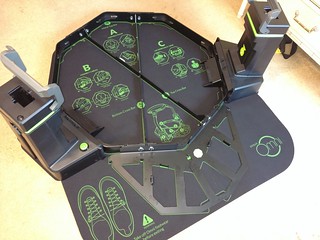 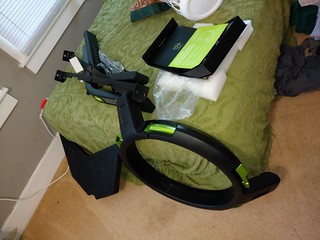 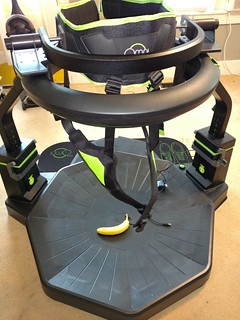 Tada! It's complete! Banana For Scale. 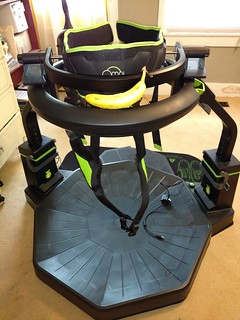 That banana is such a ham for the camera.